Apparently for George Lucas, it looks like $4.05 Billion dollars.  That is what the Star Wars IP is still worth after he raped the living hell out of it.

I have mixed emotions about this.  Actually no, I have very negative emotions about this and my mind and heart are still in shock that George Lucas still had one more card to play when it finally came to FUBAR’ing the entire franchise: 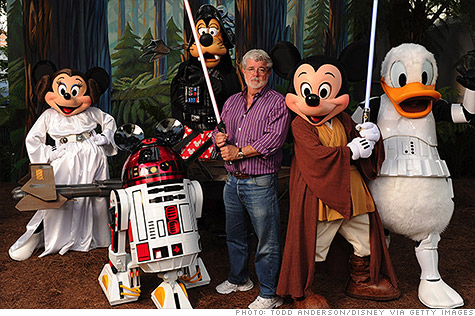 Just When It Couldn’t Get Any More Pathetic..

Really?  I mean.. Really?  It’s like “Jar-Jar’s Revenge” or something.  I think this is what hell is supposed to be like.  Where some guy who gave you one of your most lasting childhood dreams comes and proceeds to steal every one of them and abuses them until they are not only dead, but spread out in his front lawn while he makes pumping actions in his underwear and eyeing his Indiana Jones franchise.  Maybe we need to have a court order for him to undergo psychiatric evaluation..  I really didn’t think it could get any worse until they said:

“Disney plans to release another Star Wars film in 2015.”

Name one thing that doesn’t already have a “Star Wars” version of it.  The only things I can think of are a line of automobiles and airliners.  This IP has had every bit of usefulness squeeze out of it, suffocating every last bit of legitimacy and quality until there is nothing left but a dried up, evacerated husk.  Disney, do you REALLY think that people like me, who DESPISE what George Lucas did to his own story will EVER forget?

The problem is that you Disney AREN’T DARK ENOUGH to handle this IP like it NEEDS, PLEADS to be.  I have odds that what you are going to do is target the 10-13 year old market, make a silly, low-intellect, overly moral story that is simplistic to such a degree that a teenager will ignore it.  Either that or you will make it so action-packed that it will lack the sophisticated character development that it will be little more than pointless eye candy strapped on a now dead carcass of a once great movie tale.  You should have spent time watching the other company’s who got involved with George Lucas and the Star Wars IP.

Let’s look at how BADLY the Star Wars IPO has been handled by George Lucas:

4 thoughts on “What Does It Look Like When You Sell Your Soul?”