I just noticed this when the bloggers over at Foo’s Eve Musings pointed out some changes to Industrial training time, which threw off the old understanding of which Industrial was better. i.e.:

Currently there are different ‘best’ industrials depending on how much skill you want to learn.

How they described it is great.  Then they showed the following picture from the Devblog: 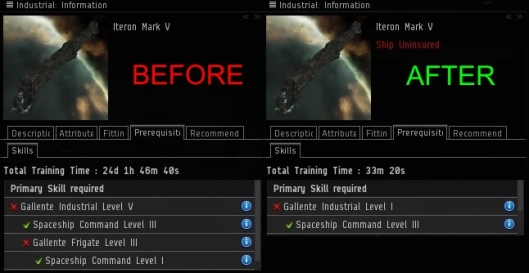 Now, it was then that I noticed something.  Indications of something that had happened before…

With Mining Barges and Exhumers.

If you look back at the skill plan above, you’ll obviously notice that Iteron Mark V has been changed from Gallente Industrial Level V to Level 1.  Obvious right?  They did the same exact thing with Mining Barges when they changed around their abilities as well.  So, what we have here, is likely proof that industrials are going to radically changed much like Mining Barges and Exhumers.  Else, what would be the point of dropping the skill levels?

Now, many of you might be thinking, yeah.. so?  And WHY do you consider it the most difficult?

Well, let’s consider how Eve Online is set up.  In every ship class, there are even numbers of combat ships.  For example, the Amarr have four cruisers, so do the Minmatar, the Caldari, and the Gallente.  The singular instance that this isn’t the case is found with Industrials (frigates used to be that way as well, but that was changed a while back).  But, it also isn’t just a “one off” situation.  If you review the industrial line you’ll find the following:

Amarr: Two Industrials – The Bestower and the Sigil

Caldari: Two Industrials – The Badger and the Badger Mark II

Minmatar: Three Industrials – The Wreathe, the Hoarder, and the Mammoth

So.. are the Gallente going to lose some ships, or are the Amarr and Caldari going to gain some ships?  Considering that all industrials are now accessible at Racial Industrial Level 1 what would be the point of five separate ships?  Comparing them to their Tech II counterparts might give us a clue.. maybe.  Perhaps one will be a little faster, the other one able to carry more cargo.  But, that seems too simple and would require the removal of four ships from Eve, if balance is to be achieved.

Still, there really hasn’t been any rumors about adding any ships either.  No glimpses of new Amarr or Caldari industrials.  No ideas being bantered about doing something other than a “speed versus capacity” matrix being exclusively used.  In addition, the only recent comment about industrials was given by CCP Yttirbium when he stated last year:

The problem is that in the very same post we see this depiction of what the future of Tiercide may look like (Gallente example): 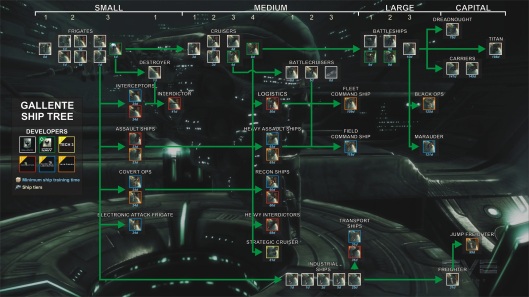 Notice at the very bottom where it shows the Iteron V.. and there it shows a skillplan time of 25 days.  Considerably more than the new one just shown to us.  So something has changed.. and probably because of the success of what happened with Mining Barges and Exhumers.

So the question remains.. what can we expect the NEW Tech 1 industrials to be.. and do..

1 thought on “A Most Confounding Challenge in the Tiercide – Industrials”