CCP Ytterbium and CCP Fozzie have been rather busy lately with the Tiercide Ship Changes as well as with new skillsets that weould be good to review.  What I am going to talk about are the critical ones that need to be on your “TRAIN NOW!” or “TRAIN NEXT!” lists.

What I said before: The first one is Advanced Ship Command.  The recent devblog indicates that if you have a Freighter, you will need to have ASC V trained up in order to run it.

What I should have said: Don’t worry about it.  As Joe noted, they changed that.  While there is a considerable amount of whining I’m sure, the skill improves your ship’s agility, something those big pigs need. 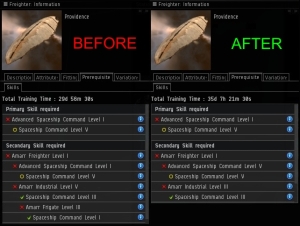 The second major skillset to consider are the Racial Sensor Compensation skills.  This skill raises your Sensor Strength by 4% for every level of the skill.  Pretty cool, huh?  However, despite the fact that the skill progresses the same for everyone, this skillset is absolutely not equal in any respect.

So, who does it benefit the most?

What I said before:  “If you are a Caldari PVP pilot, this skill is heaven sent, and it is a must to be training RIGHT NOW!.  Why?  Because since this skill increases your ship’s sensor strength, Caldari E-War ships now become even better at using ECM.  In other words, this skill is both a defensive AND an OFFENSIVE skill, but only for Caldari E-war ships.”

What I should have said: (Nothing about the Caldari being special secret squirrels.  Plus go back and relearn ECM.)  This skill is also a “TRAIN NOW to V!” skill for Minmatar pilots for the very opposite reason as Minmatar ships typically have the weakest sensor strength of all the other races.  Amarr and Gallente pilots could probably get away with stopping at level IV.

The third major skillset to consider is the upcoming Armor Honeycombing skill, which is to be released next week.  This new skill reduces the mass of armor plates by 5% per level to a maximum of 25%.  Mass affects a ship’s agility, making the ship turn slower the more mass it has.  If you skill  this up to full however, you will see a slight agility improvement (0.1 sec align time per 1600mm plate). It may not seem like much, but that does add up if you are using Tech II 1600mm plates or if you run multiple plate setups.

Fleet Doctrines – Why the Need?

I overheard in comms the other day a couple guys who were rather upset about being forced to abide by some fleet doctrines.  Now, likely these guys haven’t been in Eve Online long and some of them haven’t been in null-sec often, but at the same time, the general complaint does have some legitimacy behind it.  However, before we get into this, we do need to establish some realities.

Reality #1 – Kitchen sink fleets ALWAYS fail next to well thought-out, prepared fleets.  Their losses are less, their reaction times are better, their tactics are more defined.

Reality #3 – When Morale is raised, more people participate across all alliance activities.  Even the ones people don’t like doing.

The Problems with Fleet Doctrines

Most Fleet Doctrines usually are started the same way that a person new to fantasy football starts, almost always with a belief that they will get what they want.  Most alliances usually have one or two people who delve deeply into EFT/Pyra/Battlereports and can figure out that certain ships, if fitted a certain way, and flown a certain way, can be a very formitable opponent.  These fits are then brought up to leadership, wherein they demand that everyone start fitting ships this way or begin training for those fits.  They might have one or two alternates, but it is expected that everyone should drop what they are doing and work towards these new standards..

The fact of the matter is that developing a proper and successful fleet doctrine requires buy-in from three different groups: The Doctrine Commitee, The Fleet Commanders, The Alliance Members.  All three of these groups have responsbilities toward each other, and all three of these groups need to be honestly considered (notice I said “honestly” there) before a plan is impliements.

The Ones Who Make Doctrine

The first group to be considered is best termed as the “Doctrine Committee” or DC, because it includes both the people developing the fleet doctrine as well as those authorizing it to become the alliance/corporate standard.  Before a fleet doctrine can be made, the DC needs to consider several factors:

1. People –  The people who will be pushing this doctrine on need to have the confidence that this isn’t a “wishful thinking” exercise.  You need to make sure that your pilots can fly it decently and regularly.  Questions like: What is the minimum number of pilots this fleet needs to be successful?  Do we have that number often, or only once in a blue moon?  How extensive is the training necessary?  Are the majority of our members already trained for it?

2. Cost – A shiny T3 Cruiser with Faction mods is great.  But buying those ships and modules is expensive and more importantly, being able to replace them, is also a huge expense.  And you need to antipate quite a bit of loss when initially fielding these fleets as it takes time to get FC’s used to how they run.  Questions like: How easy is it to get replacement ships and modules?  Do I have low-cost and lower skill alternatives?  Are those thing readily available or do we put our members at additional risk by forcing them to travel long distances to get all the necessary modules and even the ships themselves.

Another aspect of cost is when you are adding a new fleet doctrine to existing fleet doctrines.  You really want to be able to strongly justify the reasoning behind forcing people to buy potentially billions of isks worth in ships and modules.. especially if your DC is in the habit of changing fleet doctrines out every few months.

3. Fleet Commanders – Are you giving your field commanders enough time to evaluate these new doctrines before they are used?  In fact, do you even have enough fleet commanders to make these doctrines viable?  Perhaps only one or two of your eight FCs has the tactical skill to make your fleet doctrines successful.  Such foresight will limit losses due to bad tactical decisions.

Other questions that need to be considered:  It is adaptable, or does it really only work when everything goes right (i.e. enemy stays at long range or does only “x” amount of damage, or doesn’t attack our logsitics/E-War/tackle/etc.)?

The next group that has responsbility to fly the ships in the doctrine well and according to how they are laid out.  This isn’t a little thing.  It is a major reason why many fleet doctrines fail.  This group are the Alliance Members.

Now, I want to re-iterate that there is a difference between the pilot who WANTS to fly the fleet doctrine but cannot due to financial limitations or because of skills, and the pilot who simply refuses to fly according to fleet doctrine.  It is certainly crucial for the DC to include pilots like the former into their fleet doctrines.  The latter group, however, probably better just to get rid of them as they are typically less than useless.

Seriously.  If you have pilots who either a.) think they are too good for the particular fleets you are running, or b.) can’t be bothered to fit according to the fleet doctrine, or c.) are unwilling to risk piloting ships despite having billions to spare, then they are doing little good for your organization.  I’m not talking about forcing your industrialist or logistics guys into PVP ships, I’m talking about the supposedly dedicated “PVP” pilots who seem to have more stories than actual kills.  Get rid of them.  Whatever job they were doing can easily be transferred to someone else.

Why?  Because pilots who bring the wrong ships into fleet (i.e. Drakes to Armor HAC fleets, or Cruisers into Battleship fleets, etc.) undermine the ability of the FC to manage the fleet effectively and for the fleet to come home intact.  True, one or two might not make a difference, but eventually if left unchecked, that one or two blossoms into five or six and the resulting losses will lower morale and discourage your FCs.  However, once you start kicking them out, you’d be surprise how quick others who might be disposed to the above tendencies will line back up.

The Ones who Drive Doctrine

The Final Group are the Fleet Commanders, or those brave souls who lead us against our enemies.  But they aren’t all of the same caliber.  Some are good at small gang combat, others are better with capitals and supercaps.  Still others are good with aggressive tactics while some know how to “circle the wagons” much more effectively.  It may also be that you have several of a particular type of FC, but few to none of another.  For example, you could have quite a few good small gang FCs, but almost no FCs who do well utilizing battleships.

Because every FC is different, it is up to them as a group to review Fleet concepts before they get released as alliance or corporate “doctrine”.  Let me add this point:  just because the Corporate or Alliance CEO runs fleets, it does not make him/her “all knowing” in how a particular doctrine will perform.

It is also important because Fleet Commanders have direct experience in what people are showing up in, how fast they are to reship, the ideal length of roam, etc.  They can point out potential flaws and perhaps make fleet or ship adjustments to compensate.  They also have the best understanding of what the enemy will bring to the table during their operations, and this can give you insight into making reasonable changes to the fleet makeup and fits to improve its success.

Those in the Doctrine Committee need to make Fleet Doctrines that work well with what your members can reasonably field and what Fleet Commanders can effectively work with.  Alliance Members need to fly these ships, even if there is a strong likelihood of failure initially so that your operations become more skilled and cohesive.  This allows Fleet Commanders to understand the tactical situation more effectively and increase the possibility of a smart outcome.  Fleet Commanders need to put in the time on the Fleet concept to iron out what problems there are before hand, as well as have the discipline necessary to keep Alliance Members working with the fleet doctrine so that they win more battles.

3 thoughts on “New Skills and Why There Are Fleet Doctrines”